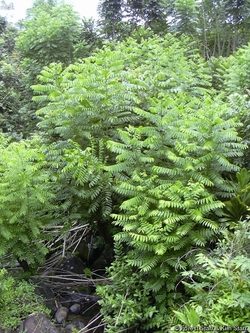 Cedrela odorata, is a popular species of tree in the family Meliaceae. It is the most commonly used and widespread species in the genus Cedrela. Also known as Spanish Cedar, the aromatic wood is in high demand in the American tropics because it is naturally termite- and rot-resistant. An attractive, moderately lightweight wood, its primary use is in household articles used to store clothing. Spanish Cedar heartwood contains an aromatic and insect-repelling resin that is the source of its popular name. Spanish Cedar is a tree of the New World tropics, appearing in forests of moist and seasonally dry Subtropical or Tropical life zones. Spanish Cedar develops best in seasonally dry climates, as reflected in its deciduous habit and its formation of (presumably annual) growth rings. However, because Spanish Cedar is so highly-valued, its numbers are continuing to be reduced by exploitation without successful regeneration. According to the IUCN Red List, Cedrela odorata is currently a vulnerable species. 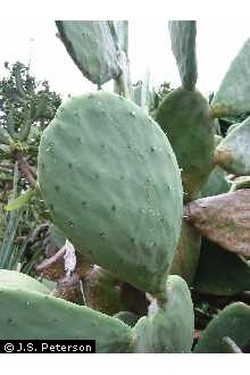 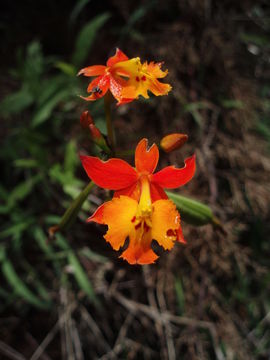 As an orchid native to Central America, Epidendrum radicans (Orchidaceae) (also known as the crucifix orchid) is commonly found along roadsides. Though not defined as a pioneer species, E. radicans still thrives in disturbed habitats; in fact, it has been suggested that greater human activity, particularly the creation of roads, has actually increased this plant’s abundance. E. radicans thrives in rocky, open areas and, unlike many other orchid species, is strictly terrestrial. Despite showing weedy growth tendencies, the crucifix orchid is not stress-tolerant and still requires adequate water, nutrients, and light. It grows up to about 1 meter, has alternate, purplish-tinged leaves, and a raceme, indeterminate inflorescence. The plants produce extra-floral nectar, which is hypothesized to attract ants to act as protection against herbivory, but they do not have any floral nectar, a typical reward for pollinators. In fact, this orchid appears to offer no reward to pollinators, but is clearly still visited by butterflies. The most popular theory is that these orchids utilize Batesian mimicry, i.e. mimicking another flower that does offer nectar rewards and thus tricking the pollinator, but this idea has come under much criticism. Nonetheless, E. radicans continues to be successful.Furthermore, they appear be adapted to infrequent pollination: plants flower all year, and individual flowers, which only last 10 days or so, are capable of producing up to 500,000 tiny, wind-dispersed seeds.
Powered by