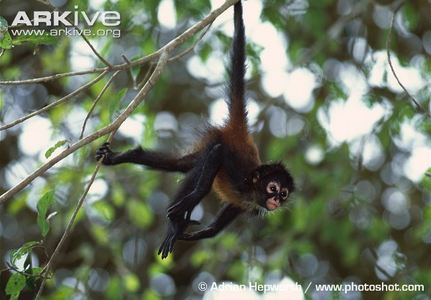 The Black-Handed Spider Monkey, having 5 subspecies, is a type of New world monkey common throughout Mexico, Central America, and South America. This species is found in rainforest, montane, and mangrove forests. Unfortunately, it is known as “endangered” because of the extreme deforestation in the region to be converted into agricultural use. It is named for it’s slender and long “black-hands.” It’s color varies depending on the subspecies, but is usually colored in black, amber brown, or dark brown. It’s head is small compared to the rest of it’s long limbs. They live in groups of usually 15 individuals, but tend to break up into smaller groups to split up work in search for food. They are awake during the day and have a varied diet consisting of fruit, seeds, and leaves. The black-handed spider monkey is unique in that they breed any time of the year. Females reach sexual maturity at 4 years old, and usually move to other groups when they reach sexual maturity. They give birth to their young at least every 2 years. Lacking thumbs, they also practice brachiation which aids in arboreal locomotion. Additionally, they are endangered because this species is often sold as pets in the illegal pet trade and are hunted for food. 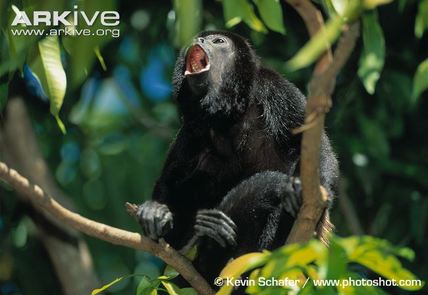 The Mantled Howler Monkey, famous for it’s jet black fur with the exception of golden yellow and light brown hairs on the side of it’s body, is found throughout Central and South America. Along with other New World monkeys, this species has a prehensile tail, and is a reasonably large monkey. Males can weigh up to 9.8 kg, and females can weigh up to 7.6 kg. Their diet consists of mainly leaves following a folivorous diet, but because plants do not offer much energy compared to other types of food, they conserve their energy by resting and sleeping most of the day.  The Mantled Howler Monkey is especially known for it’s call which allows the different monkeys to find each other without having to expend energy in moving. Their calls can reach over stretch over a couple kilometers, and vary in type. They exhibit urine-rubbing behavior in which they rub their urine on feet, hands, and tail to leave their marks around the trees. Their reproductive behavior is unique because the males and females flick their tongues before mating. This species is important to its rainforest and tropical dry forest ecosystems because they are great seed dispersers. Unfortunately, because of habitat destruction, there has been a large occurrence of forest fragmentation especially in their tropical dry forest ecosystems in Nicaragua. 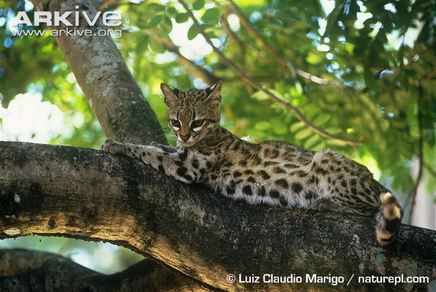 The Little Spotted Cat, also known as the Oncilla, is a very small type of cat found from as far North as Costa Rica, to as far South as Argentina. They are mostly found in pre-montane, cloud forests, but can also be found in more savanna type environments in Brazil. It is often mistaken for other cats such as ocelots and margays, so it’s distribution is often confused and hard to determine. There lacks research in mating behaviors of the Oncilla, but they are known to be solitary animals who share the same partner for life, though this has only been researched with oncillas in captivity. They are one of the smallest species of cat, weighing 1.5 to 3 kg. They are usually light brown, with dark brown to black spots which aid to camouflage in the trees. The Little Spotted Cats are primarily terrestrial animals, but are also known to be avid climbers as well. Their diet consists of small rodents, invertebrates, and lizards, and are important to their environment because they regulate rodent populations. They are negatively affected by other larger cats that prey on similar types of animals. Depending on whether they live in thick forests or grassland, they are nocturnal and diurnal, respectively. They are classified as vulnerable, and their greatest threats include forest degradation and illegal hunting for their pelts in the fur trade. 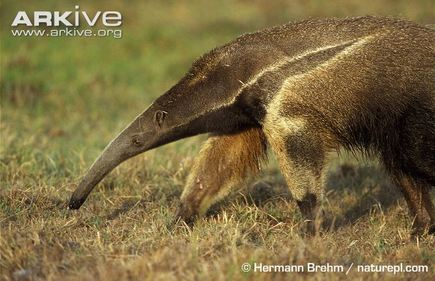 The Giant Anteater, as the name suggests, is the biggest species of anteater on earth. It can be found in both forest and grassland areas throughout Mexico, Central America, and South America, though its distribution varies greatly within those areas. They are most likely to be found in protected areas, and are a rare sight in areas with high habitat disturbance. It’s classified as vulnerable due to fires in the savanna grasslands such as during the dry season in the Cerrado. The Giant Anteater uses it’s claws to break down ant and termite mounds. Their head contains a long, sticky tongue that can measure up to 50 cm long, which is used to collect ant and termites. Their claws also offer protection against their predators which include jaguars and pumas. Their coats contain long brown hairs, and have a strip of white down their backs. They walk on their wrists and keep their claws folded underneath. They are solitary animals, and there is no difference between the male and female species. However, females are generally known to carry their offspring on their backs which could indicate their sex. They do not have a breeding season because they are able to breed all year, though this also depends on the area. Females give birth typically once a year, and give birth to one offspring each time. Because their diet consists of ants and termites, they are important to their ecosystems because they regulate insect populations.
Powered by