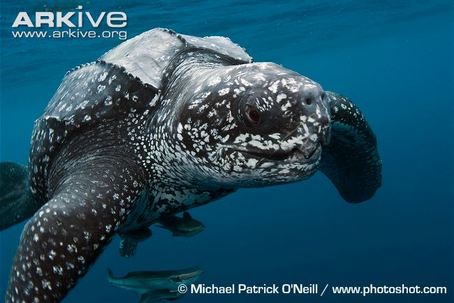 The leatherback turtle is among the oldest and largest species of turtles. Leatherbacks are the last members of an evolutionary family stretching back over 100 million years. They can grow to be 7 feet long and weigh 2,000 lbs. Unique amongst other turtle species is the leatherback’s shell. While other species of turtle have hard shells, the leatherback’s shell is flexible and rubbery. The leatherback can stay submerged for 85 minutes and dive to a depth of 4,200 ft, the deepest of any species of turtle. Adaptations such as increased body size, regulation of swimming and blood flow, and a layer of fat allow the leatherback to create heat and regulate its body temperature. Being able to control the its body temperature allows for increased range and long migrations. In fact, the leatherback goes on the longest migration of any turtle, averaging around 3,700 miles. Female leatherbacks mate at sea and then lay their eggs on the beach. Leatherbacks are currently endangered, with the steepest population declines occurring in the Pacific Ocean. The decline is largely due to impacts from human activities such as fishing and coastal development. 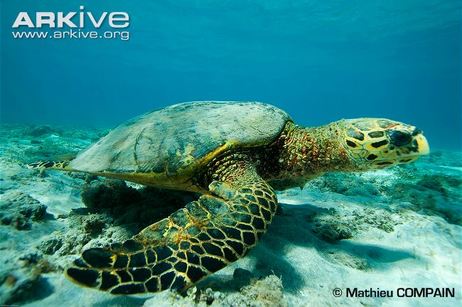 The hawksbill turtle can be found in shallow, coastal waters in the tropical areas of the Pacific, Atlantic, and Indian oceans. The turtles prefer shallow reef areas due to the abundance of sponges to eat. However, hawksbill turtles are omnivores, and also feed on jellyfish, marine algae, sea urchins, fish, and crustaceans. Hawksbill turtles can grow to be about 45 inches long and weigh around 150 lbs. The turtles’ upper shell, or carapace, is colored and composed of overlapping plates of bone. The carapace is heart shaped, while the turtles are young, and grows as the turtles age. The hawksbill turtle’s name comes from the fact that its head thins out into a point reminiscent of a beak. Additionally, the turtles have two claws on each flipper. Hawksbill turtles show some sexual dimorphism due to the fact that the males have longer claws, thicker tails, and brighter colors than the females. Mating occurs in shallow waters, while eggs are laid on shore and buried in the sand. The eggs hatch after 60 days, at which point the hatchlings must avoid predators and return to the sea. Hawksbill turtles are currently endangered due to the harvest of their eggs and being hunted for both their flesh and shells. 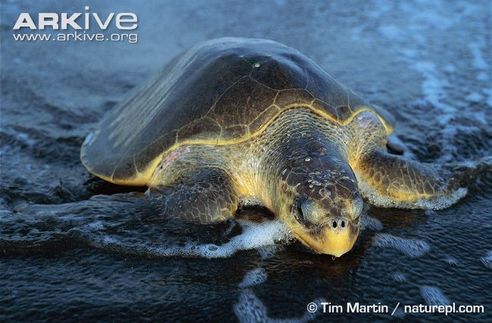 Olive Ridley is one of the smallest species of turtles, weighing only 100 lbs and growing to just 2 feet in length. They are found in the warm waters of the southern Pacific, Atlantic, and Indian oceans. Olive Ridley turtles prefer the open ocean and typically live by themselves. However, the turtles form large groups for the arribada, in which the females return to the beaches where they hatched to lay eggs. Females can lay 100 eggs at a time and create nests up to 3 times per year. Olive Ridley turtles are largely carnivorous, preferring to eat crabs, jellyfish, shrimp, and snails. In addition, they will sometimes also eat algae and seaweed. Various species of sharks are predators of the Olive Ridley.  While Olive Ridley turtles are among the most numerous of turtle species, their population is in decline, especially in the west Atlantic. The decline is largely due to fishing nets accidentally catching turtles, hunting, and harvesting of eggs.
Powered by