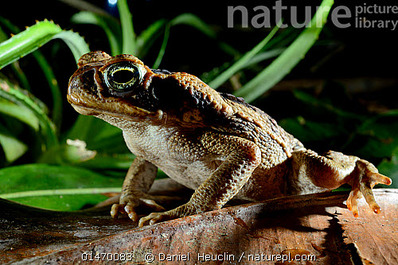 The Rhinella marina is more commonly known as the Cane Toad. Its geographic range is from the Rio Grande Valley of Texas to the north and all the way south to Peru and the Amazonian region. It has been introduced in many other parts of the world, including Australia, Hawaii and Florida. The Cane Toad has been named one of the 100 worst invasive species in the world. Cane Toads are nocturnal and have a grey olive brown skin covered with warts. They reproduce every year and the males often fertilize the eggs of multiple females. Their life span is longer than average for toads, they can live up to 10 years. The toads stand upright when they move, and are known for their short fast hops. When its confronted by predators the toads release a white fluid called bufotoxin that causes paralysis or even death. They normally eat ants, beetles, earwigs, grasshoppers, truebugs, gastropods and other bugs. In areas populated by people they also eat dog and cat food. The cane toads are not an endangered species, but are actually the target of many extermination efforts because of their status as pests. 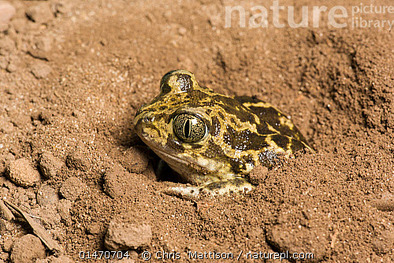 The Rhinophrynus dorsalis is more commonly known as the Burrowing Toad. Its range is from the lowlands of Texas to the north all the way to Central America to the south. Burrowing toads are nocturnal, and keep to small terrestrial areas. The toad is identifiable by its rotund body and broad orange-red middorsal stripe. Burrowing toads have a mating call and mate more than once a month. They travel up to mile to locate a suitable pond to mate and lay their eggs in the water. Their voice is unique, because it is very low-pitched and loud. When they are faced with danger the toads inflate their body and look like a flattened balloon with a triangular snout. They are called Burrowing toads, because they remain in burrows during periods of drought and even winter months. During the rest of the year they still remain invisible until heavy rains causes them to leave their burrows and mate. Their diet consists of insects, especially termites and invertebrates. The Burrowing toad is not considered endangered and its not a cause of concern at this point. 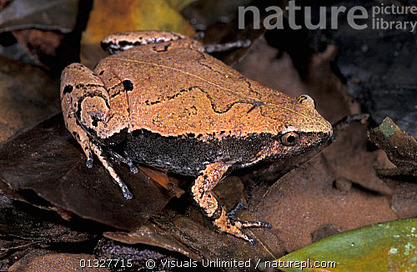 The Hypropachus variolosus is more commonly known as the Sheep Frog. It is easily identifiable by its small, oval body and smooth skin. Its pointed snout, small head and folded skin behind its eyes. Sheep frogs come in olive green and brown colors. They also have a yellow mid dorsal stipe and dark spots cover a large part of their body. They are distributed all over North America from Texas in the north to Costa Rica in the south. Their diet consists almost entirely of ants and termites. They are a shy animal that hides most of the time and only comes out at night or during heavy summer rains. Sheep frogs mate in the rain between March and September. Male Sheep frogs call to mate as they float in water with their forelimbs resting on a stick or stem. They prefer to live in subterranean burrows, just as pack rats do.  Sheep frogs are adaptable and have also burrow under fallen tree limbs in the forests of Nicaragua. 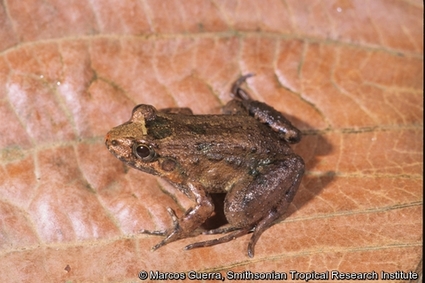 The Leptodactylus melanonotus is more commonly known as the Sabinal Frog. It's not  an endangered species because it can tolerance to a wide range of habitats, and is distribution is very wide. Sabinal Frogs can be found anywhere along the Atlantic coast in Mexico, and all the way south to Rios Province in Ecuador. Its population is very abundant in South and Central America. It is usually found in lowlands and forests, but also thrives in mangroves, open grass areas, flooded pastures, farmland and urban developed areas. The species also thrives in severely degraded environments, because it is so adaptable to change. They make foam nests in burrows at the edge of temporary waterbodies to reproduce. The species exhibits parental care, because the females regularly care for the larvae when the burrow dries. Since the species is highly adaptable they face no significant threats except for pollution by aerial spraying.