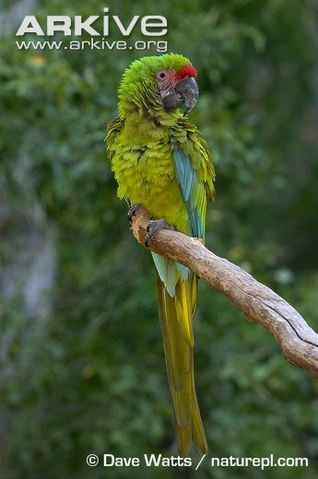 In the past this species could be found across Central and northern South America, however today populations have been severely reduced and the range now lies between Honduras and north-western Colombia. It inhabits humid and wet lowland, foothill, and dry deciduous forests, however tends to stay towards the edges of these habitats and travel across open areas in search of orchids and almonds on which to feed.

The Great Green Macaw has a distinctive olive green head, back, and upper wing, as well as a blue lower wing and the tail tip. There is also a red patch that covers the species forehead and eyes.

This species is currently classified as endangered due to habitat destruction and capture for the pet trade. This has reduced the birds ability to nest and find food, and as a result recent estimates suggest that there are just 2,500 mature individuals left in the wild. 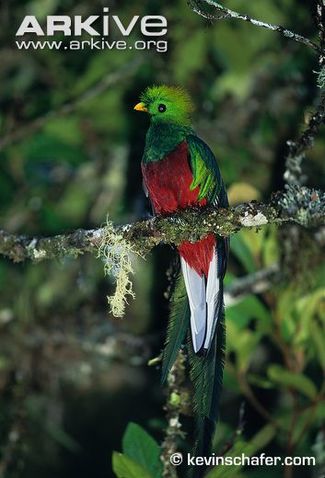 Also known as the Resplendent Quetzal, this species occurs throughout the cloud forests of Central America, including Mexico, Guatemala, Nicaragua and Panama. It is a bird that is usually found in the canopy and subcanopy of undisturbed, epiphyte-rich and thickly vegetated montane regions with a humid climate. The Magnificent Quetzal is primarily a frugivore, but also feeds on insects, small frogs, lizards and snails.

The Magnificent Quetzal can be most easily recognized by the elongated bright green tail of the breeding males, which are longer than the entire body of the bird. The head, neck, back and wings are bright green, while the breast is crimson and the beak yellow. Females look very similar but are more inconspicuous in their coloring than the males, dark green with a grey breast and black beak. The females also lack the elongated tail feathers associated with the males.

This species is currently classified as near threatened, in large part due to the widespread deforestation occurring throughout its range. Wide areas of cloud forest are being cut down to facilitate subsistence agriculture and trade crops, and this has a detrimental effect on the ability of the bird to breed. 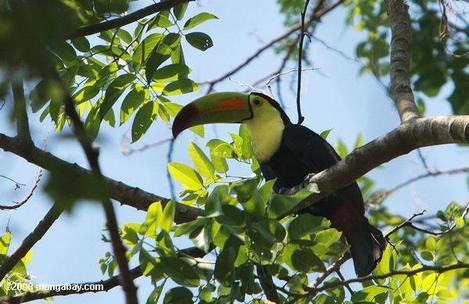 This species can be found across a wide range and is native to Belize, Colombia, Costa Rica, Guatemala, Honduras, Mexico, Nicaragua, Panama, Venezuela, and Bolivia. This bird is found in tropical and sub-tropical rainforests and is most active at dawn and dusk. They are monogamous and live in groups of between six and twelve, and rarely travel far due to their heavy wings. They primarily feed on fruits in the canopy, but are also known to feed on insects, lizards, tree frogs, and eggs. They swallow their fruit whole and will regurgitate larger seeds, while digesting smaller ones. This leads to them playing an important role in the reproduction of the fruit trees that they rely on for sustenance.

The Keel-billed Toucan is best known for its large bill, black plumage and bright yellow breast. The bill contains orange, is tipped with red and blue, and can grow to one-third the size of the species body.

This species is currently classified as least concern despite the fact that the population trend appears to be decreasing. The large population means that this decline is not rapid enough to approach the threshold that would see it be regarded as vulnerable. In the past the Keel-billed Toucan has been a target for the exotic bird trade, however its disposition makes them bad pet
Powered by